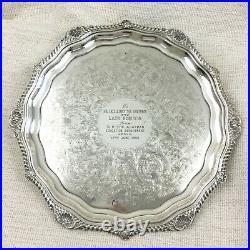 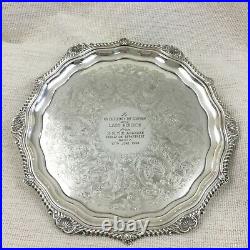 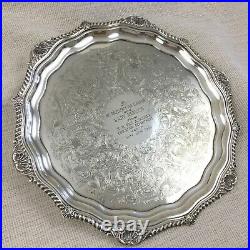 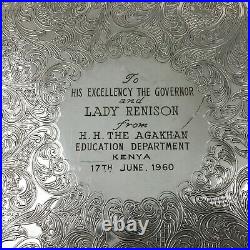 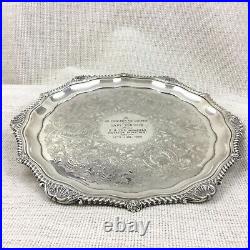 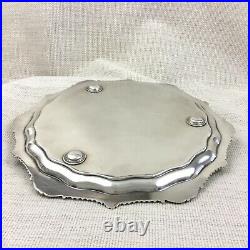 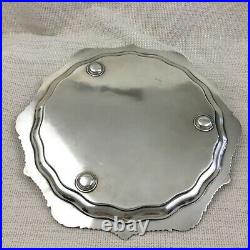 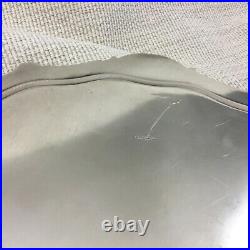 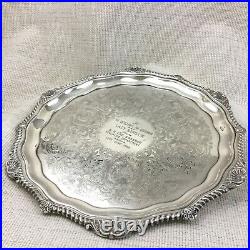 Rare Silver Plated Tray – A gift from H. H The Aga Khan to Sir Patrick Renison, Govenor of Kenya on 17th June 1960. H The Aga Khan to Sir Patrick Renison, Governor of Kenya on 17th June 1960, to commemorate the opening of the Aga Khan Primary School by Sir Patrick Renison, the then Governor of Kenya on June 17, 1960. The Try is in good condition, the plating is still bright, usual minor surface marks, commensurate with age, us and clear pictures. Approx size 34cm wide / 13.5 Inches Approx Weight: 1100g. No makers marks, just stamped made in England on the reverse. The Aga Khan IV – Prince Shah Karim Al Hussaini. Prince Shah Karim Al Hussaini, Aga Khan IV, KBE, CC Arabic:??? Aga Khan is also transliterated as Aqa Khan and Agha Khan; born 13 December 1936 is the 49th and current Imam of Nizari Ismailism, a denomination of Isma’ilism within Shia Islam with an estimated 10-15 million adherents (10-12% of the world’s Shia Muslim population). The Aga Khan is a business magnate with British citizenship, as well as a racehorse owner and breeder. He has held this position of Imam, under the title of Aga Khan IV, since 11 July 1957, when, at the age of 20, he succeeded his grandfather, Sir Sultan Muhammad Shah Aga Khan III. It is believed that the Aga Khan is a direct lineal descendant of the Islamic prophet Muhammad through Muhammad’s cousin and son-in-law, Ali, considered the first Imam in Shia Islam, and Ali’s wife Fatima az-Zahra, Muhammad’s daughter from his first marriage. Additionally he is unique among the richest royals as he does not rule over a geographic territory. Among the goals the Aga Khan has said he works toward are the elimination of global poverty; the promotion and implementation of religious pluralism; the advancement of the status of women; and the honouring of Islamic art and architecture. He is the founder and chairman of the Aga Khan Development Network, one of the largest private development networks in the world. The organisation works toward improvement of the environment, health, education, architecture, culture, microfinance, rural development, disaster reduction, the promotion of private-sector enterprise and the revitalisation of historic cities. Since his ascension to the Imamate of Nizari Ismailis in 1957, the Aga Khan has been involved in complex political and economic changes which have affected his Nizari Ismaili followers, including the independence of African countries from colonial rule, expulsion of Asians from Uganda, the independence of Central Asian countries such as Tajikistan from the former Soviet Union and the continuous turmoil in Afghanistan and Pakistan. Aga Khan IV became the first faith leader to address the Joint Session of the Parliament of Canada on 27 February 2014. Governor Sir Patrick Muir Renison. Renison was born in 1911 in Rock Ferry, England. He attended Uppingham School, and later Corpus Christi College, Cambridge. He entered the Colonial Administrative Service in 1932 and was seconded to the Colonial Office. In 1936 he moved to Ceylon where he was appointed to the Ceylon Civil Service. He would remain in Ceylon until 1944, during which time he would hold a number of Civil Service posts across the country. Following the Second World War, Renison was asked to assist the Colonial Office’s plans for post-war recruitment. In 1948 he began work as Colonial Secretary of Trinidad and Tobago. Rension was appointed Governor of British Honduras in 1952, a post he held until 1955. He subsequently served as Governor of British Guiana between 1955 and 1958 and Governor of Kenya between 1959 and 1962. He died in Marylebone, London on 10 November 1965, aged 54. His daughter, Anne Willoughby Renison, married Hugh Cholmondeley, 5th Baron Delamere of Pitt River b. This item is in the category “Antiques\Silver\Silver Plate\Plates/Platters/Trays”. The seller is “pahlavi.london” and is located in this country: GB. This item can be shipped worldwide.